SAN FRANCISCO, CA – The Palm Center today released a graphic entitled “5 LIES to Know About DOD’s New Policy on Military Service by Transgender Persons and Persons With Gender Dysphoria,” which corrects a Pentagon graphic with a similar title that contains five misleading claims about the new policy. 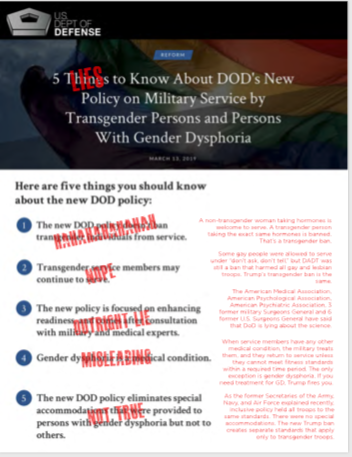 The Pentagon’s original graphic claims the new ban is not actually a ban; that the policy will enhance readiness; and that the inclusive policy it replaces had given transgender troops “special accommodations” from military standards, among other assertions. Yet all these claims are false, and several others made in the Pentagon graphic are misleading, as the new Palm graphic explains. In truth, as three former service secretaries explained earlier this month in admonishing the Pentagon for spreading the false claims at a Congressional hearing, inclusive policy requires that “transgender service members must meet exactly the same fitness and deployability standards as everybody else.” By contrast, the Trump policy applies two different standards depending on whether someone is transgender or not. The Palm graphic concisely describes and corrects all five deceptive claims.

Two recent polls, by Quinnipiac and Dalia Research, found that 70% of respondents favor allowing transgender Americans to serve in the military. Top military officials have been overwhelmingly supportive of letting qualified transgender troops serve, including the chiefs of all the military service branches. Scores of retired flag officers have chastised the Pentagon for abusing the principle of military judgment to advance a discriminatory policy that experts across the board have called groundless.